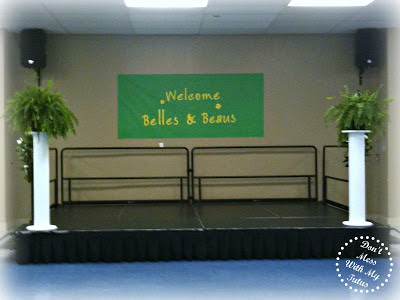 As you know, I recently coordinated an Old South-themed 'Belles and Beaus Ball' for our Girl Scout service unit!  And one of the projects our committee came up with to help transform our event space (a large metal building that was once used as an airplane hangar) into a southern plantation for our soiree was a set of columns to flank the stage.
Now if you have ever shopped for columns or priced column rentals then you know that these babies can be very pricey and a rental would have to be returned.  Any way we sliced it, ready-made columns were just not going to be 'using our resources wisely,' so we had to come up with something else!
Luckily, I have a very dear friend in the construction business that I knew might be able to help and I was right!  Yippee!
He suggested I take a look at these: 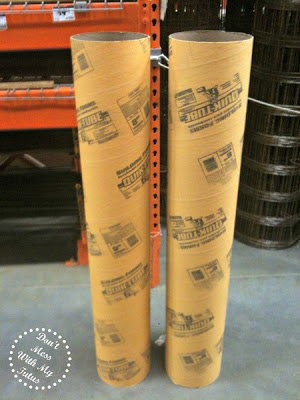 These are cardboard concrete forms that are approximately (I emphasize it because it turned out to be quite important) 8" in diameter and 4' high.  Just for reference, a similar sized column around here would rent for about $25.00 each (ouch!) and they'd be ours for only one night! 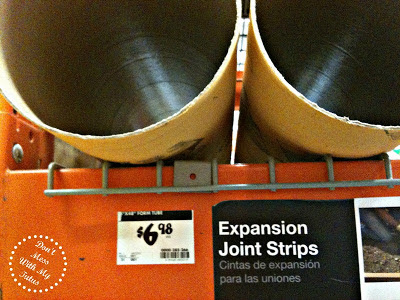 The cardboard forms were a mere $7.00 each, so here's where I went with it: 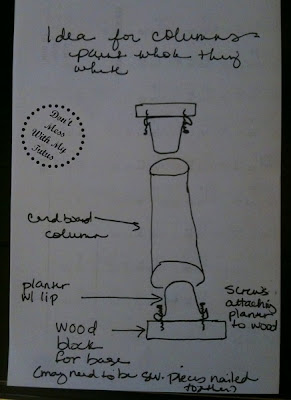 Using inexpensive plastic pots for the top and the bottom, I was able to mimic the look of a roman column with the turned rim.  I envisioned screwing the pot rims to small wooden bases to make them more sturdy and allow us to fill/weight the bottoms of the columns with sand to prevent tipping.
And here's the mock-up at Home Depot, who was kind enough to donate all the supplies for this project (including the ferns on top), so it ended up being 'no-cost' columns for us! 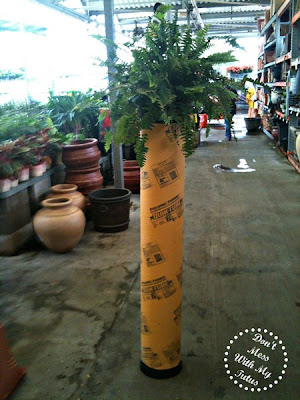 ﻿
As you can see from the first picture, we simply painted all the pieces white and them assembled them at the event center!  They were lightweight for transporting and have already been used again at our service unit bridging ceremony!
I mentioned earlier that the diameter of these cardboard forms was an issue - because when choosing your pot, the diameter of the column will determine how far down your pot will seat in the form.  it turns out that the two we originally had were not actually the same diameter, which would have made one of the finished columns noticeably taller than the other.  We solved the problem by exchanging one for another at a different store to get two that were closer in diameter, but afterwards I realized that it could have been solved by getting a smaller diameter pot instead and that might have been even easier.  I found the best plastic pots for this project at Dollar Tree because they ended up being very forgiving on the column diameter and had a larger rounded lip that looked better on the column than the one in the mock up in my opinion.  Also, the least expensive HD pot in the size and configuration that we needed was about $2.50 and the ones at Dollar Tree were obviously only a dollar!
These were a great addition to our 'Plantation Party' but could be put to use for lots of other things as well, so I'm really happy that they worked out!