What's in a Name?

Well, here it is! My first ever blog . . . and boy has it been difficult figuring out all the names required to publish my musings about the ins and outs of this crazy, busy life of mine!

It all started so simply. My youngest daughter, referred to here as Sheep, wanted to be a lady bug last year for Halloween. Now one of the things I committed to doing when she arrived o 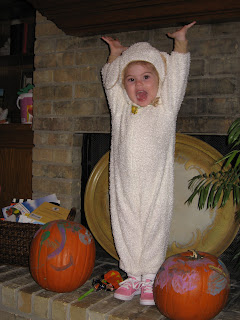 n this Earth (or maybe I should be committed for) was making all of her Halloween costumes myself. I've been sewing since I was about 8 or 9 years old, so this should have been easy. To make good on my promise to myself, because I'm not sure she remembered it frankly, I bought a simple pattern that had several different costume ideas, most of which consisted of a simple bubble, but had a couple of doosies thrown in there too, relatively speaking anyway. I was planning on her being a bee. She took one look at that pattern and said she wanted to be the sheep. Fitting because Sheep really was her nickname already, but frustrating because I was only planning on sewing a bubble. I just knew the sheep material would be too hot for Halloween along the Gulf Coast and I seriously doubted she would wear the hat! But, she was persistent. So, a sheep she was - and a cute sheep too I might add. She even wore the hat!


Anyway, thought I would show her the pattern again last year, since it hadn't been used for the various bug ensembles yet, and heaven knows there will be plenty of princess costu 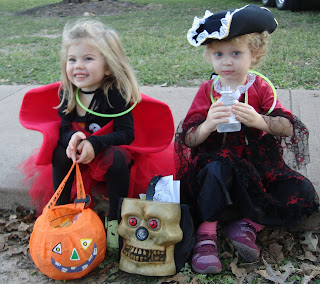 mes ahead for this little one, so I am trying to delay that for as long as possible. Well, she said lady bug - yippee! She agreed to the bubble! But as luck would have it, we were over a friend's house that night who happened to have a pair of felt ladybug wings already made and the very next day we came across a ladybug tutu in a store . . . and well, like mother like daughter, I thought, "I could just make that!" So simple! So fun! She looked great!! Maybe I could make these for others! And just like that, my latest business venture was born! (She says she wants to be a lamp this year, so I may never get make that bubble costume.)

I say latest, because over the years I've had many business ventures and even more business ideas! In the early days, these were mostly concocted with my brother, who also has an entrepreneurial spirit (either that or he was bored like I was in the summer)! Anyway, we tried lemonade and other drink stands. We ran a tattoo parlor out of our garage using markers on paper. I drew designs and colored them (I did custom designs too) and he was responsible for drumming up business, taking the money and licking the arms and hands I "tattooed" them on before we wised up and used water instead! We had a short run tie-dying shirts (I think most of those ended up as seat covers in his first clunker car . . . ) and my childhood BFF and I ran a small science lab out of her shed that we charged admission for too. But, I digress . . . .

Every business has to have a name and even Shakespeare seemed to know something about names and marketing, so what would my tutu business be called? Tutu Cute was my first thought but apparently it was for others as well, because you see that name and phrase all over the place when you start looking. Since Sheep was the inspiration for this adventure to begin with, I thought it was only fitting to somehow reference her in the name, and she can be a real sassy pants! Fortunately, she frequently wears other pants as well - smarty pants, cutie pants, you get the idea.

With the name of my studio decided, I thought I was done. Turns out more names were needed, like for my blog! I didn't want my blog to simply be another form of advertisement for my online business; I wanted to chronicle my other adventures as well. I wanted to name it something else . . . but I still wanted to reference my business. I went back to my list of suggestions from friends and family from the first time around . . . and "Don't Mess With My Tutus!" was launched! It was my brother's suggestion, but somehow that feels right, like we're still in it together in some small way. Thanks bro'!
Posted by Jen Rollins at 10:32 PM