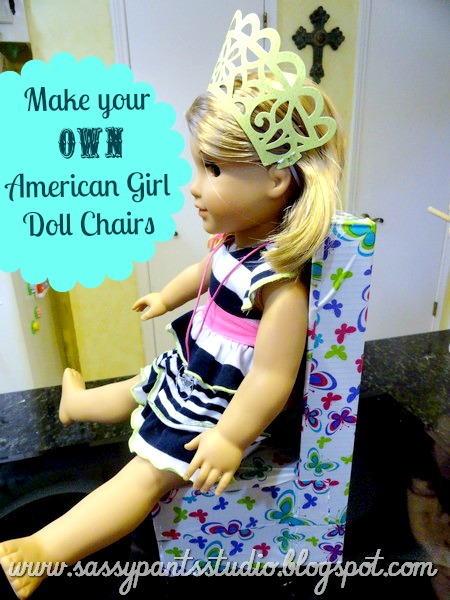 This was a quick and easy solution to the 'chair dilemma' that was presented to me by the birthday girl when she decided she wanted to play musical chairs with the dolls during her American Girl Doll Sleepover.  We were expecting 12 (Yes, 12!!) American Girl Dolls and their 8-year-olds to be in attendance, so I needed to come up with chairs for the evening that would be inexpensive as well as adorable.
Thankfully, I had just bought a new pair of shoes (yay, me!) and was inspired by the box, which I thought could easily be converted into a chair.  And, with nothing more than a kitchen knife to cut the bottom and some colorful duct tape to piece it together, it was! 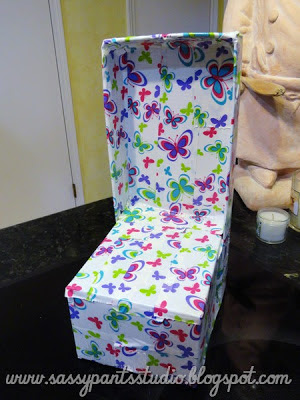 Alas, I was able to get the rest of the boxes FREE from a local shoe store (Thanks DSW!), so mommy didn't need to shop for more shoes (Awwww).  Though it didn't stop a pair from jumping in my basket while I was collecting the stash of boxes one afternoon.  They were 75% off and oh sooo stinkin' cute!  But I digress . . . 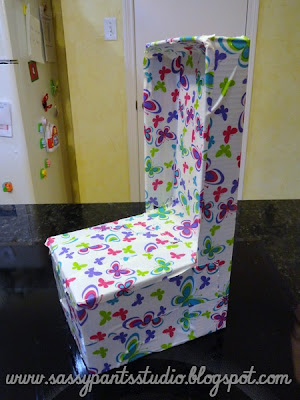 Anyway, I found that the box chairs worked best when cut a little more than half-way, because you lose some of the length for the seat once it's inserted into the lid.  Also, because of the expense of the duct tape (the most expensive part of this project BTW), I actually ended up trading some of the larger shoe boxes that were given to me with some of the narrower boxes in my closet already, just to save tape.  Using the narrower (sandal) boxes, I was able to get about 2 and 1/2 boxes covered per roll using the patterned tape - there's less per roll on the patterned tape, so keep that in mind when you're calculating how much you'll need! 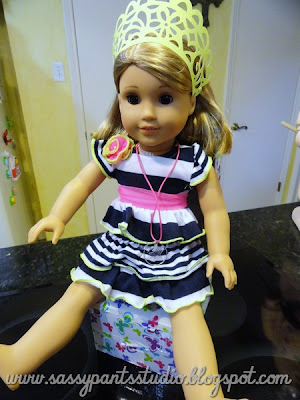 Although I originally thought these might be simple enough to enlist the birthday girl for some help, duct tape turned out to be more challenging for her than I planned, so give yourself a little time if you're planning on making a dozen lke I did!  I chose to insert the cut end into the box lid to give it lots of stability and to make it easier to cover, but you might be able to have the cut end facing out as well.  I liked the look of the solid chair though, don't you? 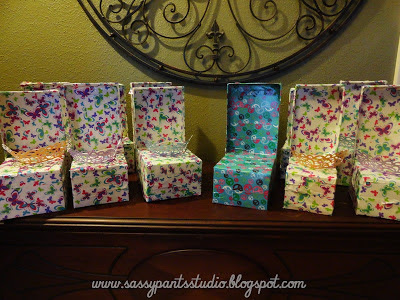 And here they are, all lined up and ready to be played with!
The dolls and their girls just LOVED them!! 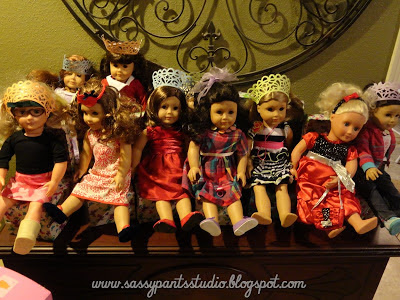 While we got our craft on, the dolls had their own 'Meet-N-Greet!' 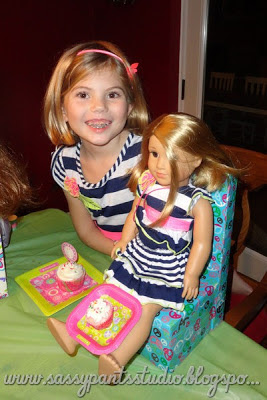 Most of the dolls sat in their own chairs for cupcakes!  Then the girls used them to set up a theater for the dolls while they watched an American Girl Doll movie themselves.  So creative! 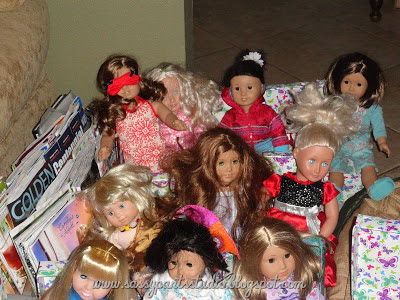 Before the end of the night, these chairs had been used for a spa and waiting room as well.
And don't forget musical chairs! 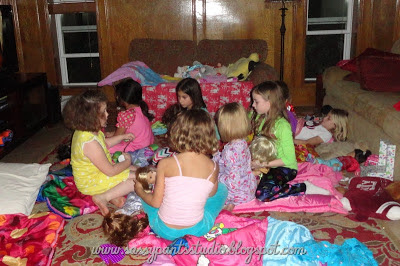 Along with the jewelry they crafted and the cupcake wrappers we repurposed into doll tiaras, these sturdy little shoebox chairs made great party favors for all our guests!

Sharing this Sassy Idea @ Sunday Showcase, Mop It Up Mondays, Meet Me Monday, Made by You Monday, Debbie Doo's Newbie Party, What's In the Gunny Sack, Take-A-Look Tuesday, Tuesday Tutorial, Wow Us Wednesdays, {Wow Me} Wednesday @ Gingersnap Crafts, Cowgirl Up, Off the Hook, I Gotta Create, Whimsy Wednesdays, Pin It Wednesday, Show and Share, Semihomemade Mom, Overflowing with Creativity, House of Hepworth, Off the Hook, Finding the Pretty and Delicious, Creative Me, Made U Look, It's a Hodgepodge Friday, Kitchen Fun with My Three Sons, Saturday Show & Tell, Weekend Showoff Party, Pin It Party @ Debbie Doo's, Strut Your Stuff Saturday, Tatertots & Jello
Posted by Jen Rollins at 9:32 AM