The best Christmas gift I have ever received came two weeks early one year, and I could not wait to get her picture taken with Santa.  Crazy, I know.  But I'm telling you, if there had been a Santa at the hospital, I probably would have stood in line to have it done before we even left!  I just love seeing Santa and wanted to make sure it was a part of my child's (now childrens') Christmas traditions too!  So each year we go and stand in line to whisper our heart's desire into his ear  . . . and I use the photos to decorate around the house.  But with eight years of memories under our belts, it was getting harder to find a place for all of them!

As I was heading into the kitchen to exchange our beach pics on the kitchen window ledge for Santa pics I looked up had an AH-HA moment! 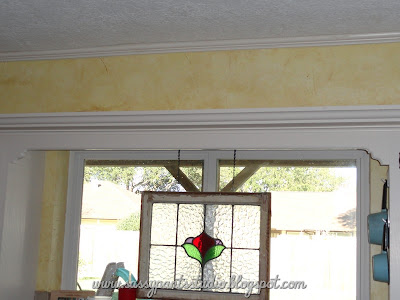 Now over the years I have tried sprucing up that space between the cabinets and the ceiling with various things, including wooden word art and decorative plates to name a few, but nothing seems to stick.  But it looked like it might be time to try again . . . 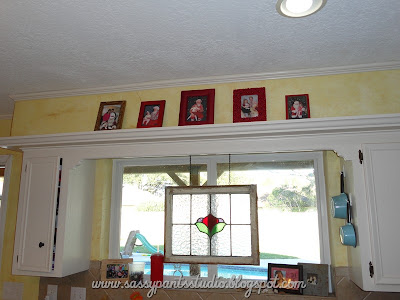 
I keep my eyes open for red frames year-round, though they haven't all made it in to one just yet.  What can I say, just about everything in my house is a 'work in progress' {smile}. 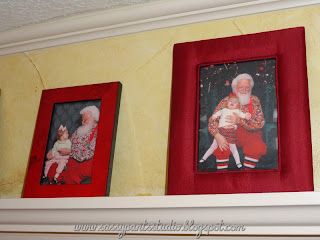 These our two of my favorite Santa pics.  I love her expression in the first one and the two-year old pic is priceless!! 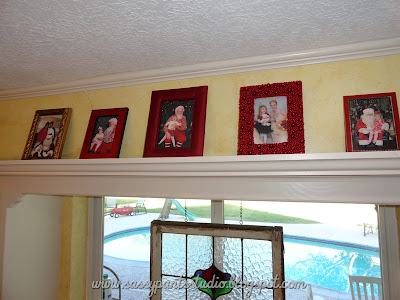 Not bad, but it still needed something.  It's a long space after all.  It was about that time that I started wishing I had asked Santa for a Silhouette and some vinyl while we were there.  But lookie what I found the very next day while I was out and about! 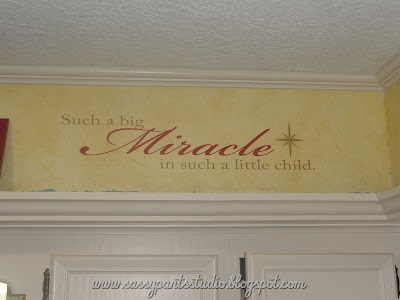 Yippee!
The perfect wall art for my Seeing Santa display!  And it was already half-off so it was only a dollar!
I was standing on a stool to take this close-up and from this angle you can catch a glimpse of my 'solution' to the problem of the reservoir made by the crown molding on the cabinetry.  I need something to fill in that space so the pictures would have something to rest on.  I cut an old pool floatie in half and wedged it into the gap - now that's using my noodle!!
(Sometimes I crack myself up!) 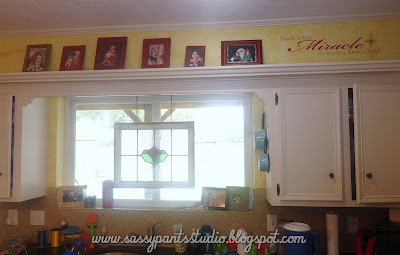 Shooting toward the window made it hard to get a really nice picture of the finished product (and I probably could have straightened up a bit too - ha), but I love the way it came out!  And there's plenty of room to grow!  Hopefully my 'repositionable' word art will be 'reusable' as well.  But just in case, I ran back and bought another one for next year!
Merry Christmas Y'all!
Sharing this Sassy Idea @ Mop It Up Mondays, Meet Me Monday, Debbie Doo's Newbie Party, What's In the Gunny Sack, Take-A-Look Tuesday, Wow Us Wednesdays, Cowgirl Up, Whimsy Wednesdays, Show and Share, Overflowing with Creativity, Creative Me, Made U Look, It's a Hodgepodge Friday, Saturday Show & Tell
Posted by Jen Rollins at 8:28 AM