It's that time of year again!
You've probably already had them casing your neighborhood - knocking on doors and smiling while they wreak havoc on your new year's resolutions with their tasty temptations.
Yes folks, I'm afraid so . . . It's GIRL SCOUT COOKIE TIME!! 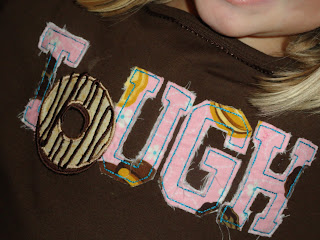 Last year, my very first year selling cookies as a girl scout MOM, I was terrified of the goals being laid before me.  And there were plenty of phone calls and much wringing of hands while I tried to figure out if all this focus on funds was something I wanted my daughter (or myself) involved in.  After all, isn't the purpose of selling cookies to teach our girls lessons about manners, financial responsibility, leadership, and blah,blah, blah . . . you get the idea.  And I was worried!


Weeeeell, it is - but it's also about the money!
One year later and I now find myself in the position of co-leader for this fledgling troop and let me just say, "Helping Girls Grow Strong ain't necessarily cheap!"  So this year I vowed to get off my soapbox, ignore my moral high road and take the road MOST travelled instead.


Uuugh!
Luckily, Sheep is one year older (and wiser) and has caught the cookie bug this year, so she's willing to help!  Last year she set her sights on a journal that required selling 200 boxes of girl scout cookies.  And she did it!!!!  And when I say she did it - I mean SHE did it!  I was not working (outside the home) last year and Speed was working from home, so mom and dad did not have offices.  No break rooms tables to simply throw the form out on and wait for the orders to come rolling in over lunch.  Instead, she had to go door-to-door and person-to-person.  She made lots of phone calls as well.  Speed is a salesman by day, so he helped her with her pitch and she got quite good at it if I do say so myself!

I guess I have my mom (a former girl scout leader herveryownself) for my insistence that she sell them herself.  My mom always made us call up to her office to sell cookies or other school things rather than taking the forms to work.  At the time I thought it was torture.  Now I see it as a stroke of genius!!  It is sooo much harder to say no to that tiny voice and that earnest little look!

This year, she has set her sites on the LARGE stuffed penguin plush toy that requires selling 650 boxes (what the . . .?)!!  Can she do it?  Probably not.  Don't tell anyone, but girl scout leader/mom doesn't really want to deliver 650 boxes of girl scout cookies either.  But I am LOVIN' the effort I am seeing from this girl!!  And even though we've 'officially' gone cookie crazy this year with a troop goal of 2200 boxes, I am secretly smiling to see her using her math, HER MANNERS and making change like a pro!  I'm also impressed with her practicality (which I have never been accused of having - ha!), because she has assessed her initial goal and revised it now that she's been pounding the pavement this week.  So we'll see . . .


Either way, thanks to girl scouts she's already growing into ONE TOUGH COOKIE!! 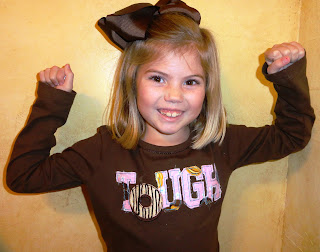 P.S.  If you need a connection, Sheep can hook you up!!
P.S.S.  In additon to everything else,  I also fight with own an embroidery machine.  I put this design together using the varsity feltie font from Planet Applique and a donut design (I don't know about you, but that looks like a Samoa to me!) from Stitch on Time.  Check these ladies out - they both have great ideas and products!  This was my first try at a 'raggy' alphabet.  Not too shabby - ha!  Sometimes, I crack myself up!
Posted by Jen Rollins at 11:47 PM