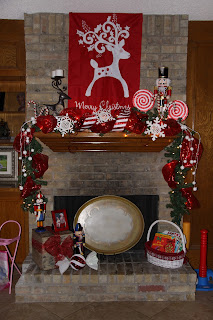 Other than the tree itself, the fireplace is probably the most often decorated space in the house come Christmastime!  Especially down here, where it is HOT, HOT, HOT nine months out of the year, we might only get to use our fireplaces five or six times a winter, but nearly every house around here still has one.

Because you can DECORATE them!!

In my opinion, lights make the mantle at Christmas, but for the past few years, I have stuck to ribbon and trim (no lights) because my garland was small, and short and generally sad so there wasn't enough of it to cover the extension cords and i have a thing about being able to see cords running everywhere.  But - as I mentioned before, my NEW (and improved) garland is thick and fluffy and long enough to drape down the sides - problem solved!!

So, to begin this mantle masterpiece (or your version of it!), wind lights through your greenery, making sure that your pronged plug is at one end so you can get it lit up.  My neighbor had her mantle done before mine, and I fell in love with the twinkle lights she used so I ran out and snatched some up - zippy quick!  I plugged them in briefly to make sure they worked before working them into the garland and starting on my ribbon, but apparently I should have been paying more attention, because instead of a starry night, my lights twinkle like an arcade!!

After 15 minutes in my living room, I'm waiting for quarters to start spilling out of the fireplace (which HAS NOT  happened yet.  I'm still waiting . . .).  And friends prone to seizures should definitely steer clear until after the New Year!  Unfortunately, I didn't really appreciate this until after my mantle was completely decorated, so that sucker's just gonna have to stay that way until next year - Ding! Ding! Ding! 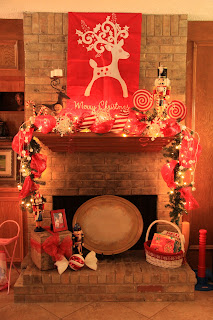 Tip # 1:  Check your lights thoroughly before you begin decorating your garland.  Just sayin'.
Once you've got your lights threaded, it's time to work in your ribbon.  I do all of this on floor rather than on the mantle since big, fluffy garland - actually all garland for that matter - has a bad attitude and will leap from your mantle at the slightest provocation, so it's best not to antagonize it too much once it's up there!  To deter this unwanted behavior,  I place 'Command' hooks directly on my mantle at intervals across the back and wind one of the needles from the garland around each one.  It's all hidden by the rest of the greenery anyway. 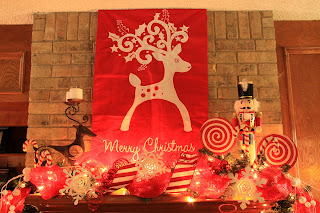 This year, I nestled a nutcracker and my reindeer in behind the garland and simply hung an outdoor flag I already had from the ceiling using thumbtacks - SO SIMPLE!  In order to get the lollipops to stand up, I tucked a block of florist foam underneath the garland (It really does hide everything!!) on one side.  Everything else is just snuggled into the greenery, but is not secured.  No hot glue guns or blistered fingers required - yay!!  That also makes it easier when it's time to dis-mantle your fireplace as well -  ha!

In fact, I got so excited about the mantle that I kept decorating right on down to the hearth!  I used some leftover ribbon to make the bow on a wooden box I already owned and stashed all the kids' Christmas books in a basket I had as well!  Added a few more nutcrackers and a picture of Sheep and it's ready for Santa!!

Tip #2:  Look around!  Your house is probably full of things that can be re-purposed for Christmas! 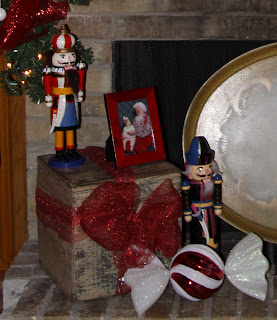 Now all that's left are some red and white stockings that still need to be made.  At least they've made it on to my 'To Do' list this week.  And if they make it to the 'Ta-Done' list I'll be sure to let you know!
Merry Christmas y'all!
Posted by Jen Rollins at 11:15 AM