Just about everyone's probably been to a parade - but have you ever been IN a parade??  Well, I grew up in a big city and we went to lots and lots of parades growing up.  And I have lived on the Gulf Coast for my whole entire life, so Mardi Gras parades are also a yearly event.  But, I had never, ever BEEN in a parade - until last night!!

My girl scout partner in crime co-leader and I agreed that our town's annual Christmas parade would be something fun for our little daisies to do and when we called about entering and found out it was FREE - well, we took it as a sign that it was meant to be!!

Who knew it would be so much WORK to find a trailer, and oh yeah, you need a generator and lights and decorations and so on and so forth - AAACK!!  After I spilled the beans to the girls (Grrr - I know better than that!!  What was I thinking?!), I decided I had better google parade floats to find out what I was now in charge of - DOUBLE AAACK!!  Had I finally bitten off more than I could chew?!!?!

Frankly, I was more than a little bit panicked!

Especially when a quick review of the budget gave us only $40 for our float!!  Girl scouts "use resources wisely" - it's the LAW!!  The Girl Scout Law anyway!!  Truth is, I hadn't really given a lot of thought to this verse before but I now understand it to mean - we're cheap!!

But Girl Scouts (and their fabulous moms!!) are nothing if not resourceful!  So we just put our pretty little heads together and put a call out to our friends and families and it all came together just fine!!  Better than fine actually!  See for yourself! 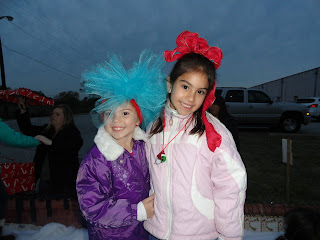 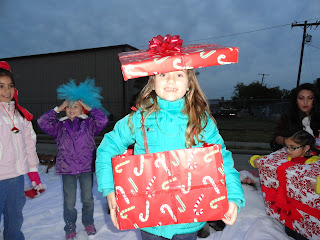 As you can see, we decided to dress the girls as presents and lined the trailer with wrapped HEB boxes (free!) and donated lights (free!).  We had a mom with an extra Christmas tree (free!) and decorated our tree with empty girl scout cookie boxes (also free!).  We threw blankets down for the girls to sit on and covered them with a roll of felt that I already had (free!).  A very kind friend of mine loaned us her lowboy trailer and inverter (free!) and we 'borrowed' the battery off our camper (free!) to run the lights and karaoke machine we used to play our music.  One of our daisy scouts already had the karaoke machine and Christmas CDs as well (free and free!).  About the only thing we had to pay for was wrapping paper and duct tape and even some of that ended up being donated! 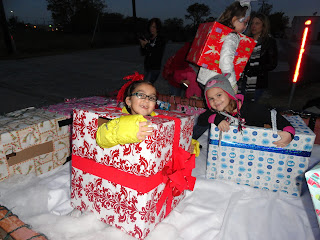 Saturday night it was clear and COLD for a change and all the girls had a FANTASTIC time!! 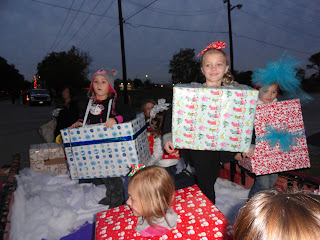 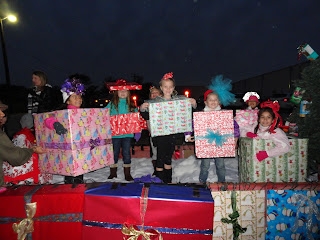 Speed pulled the trailer and Snacks spent most of the time eating goldfish (ha!) and generally enjoying the girls and chaos!!  He's such a little trooper himself! 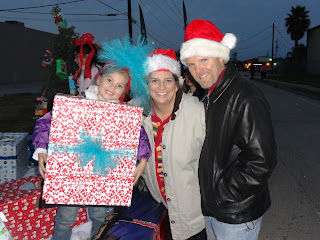 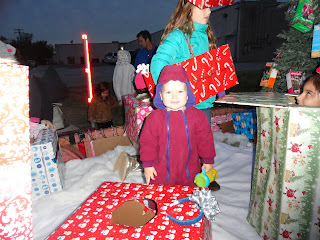 The parade may have been my gift to them, but they are each a present to me as well.  I enjoy being their leader more than I can put into words and feel so blessed to be able to be involved in Sheep's life in this way. 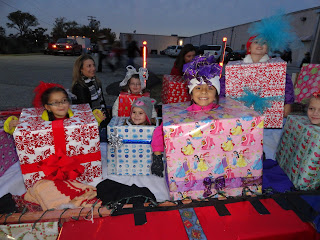 It may not have been Macy's, but it was DARLING!!  A memory Sheep and I will always share!! And it's one of the many things I appreciate about life in our small town!! 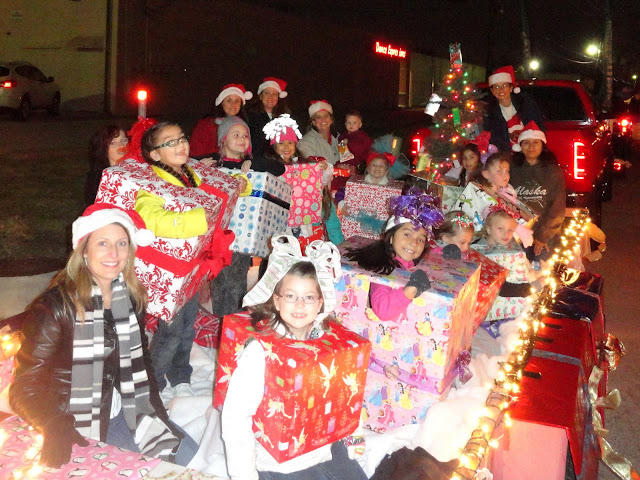 Who knows - we might even have won something in the contest! I didn't realize there was a contest until we passed the judges booth - but it's got me thinking about next year already!! 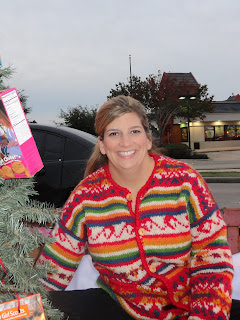 Merry Christmas y'all!
Posted by Jen Rollins at 10:04 PM